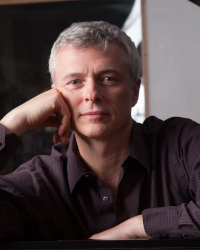 Words on Fire Coffeehouse on the Mainstage: Piano & Poetry with John Hegner

John Hegner is a songwriter, composer, pianist, and the owner of Starbell Hatchery Recording Studio in Harvard, IL. John began his musical journey with piano lessons at age six. He began composing music at age twelve. John studied at Interlochen Center for the Arts, Eastman School of Music, and Berklee College of Music. He worked as a commercial composer for more than 20 years in Boston and New York. During his tenure in New York City he began producing other artists, helping them to achieve their musical and recording goals. John is passionate about collaboration and has led workshops on the topic and participated in interdisciplinary projects with poets, visual artists, and musicians. John’s studio, Starbell Hatchery, is situated on an idyllic nature preserve in Harvard, IL, one hour northwest of Chicago. Working from this peaceful, beautiful space, he composes and records his music and offers expertise to others wishing to do the same. In performance, John's mission is to build an intimate rapport with his audience and universally promote self-expression through the artful sharing of personal stories.

Buy To This Event Directions